To raise great bonsai, long time and detailed daily care are essential.
This is true for raising Japanese dogs, too.

In addition to Shiba dogs, bonsai is another representative of Japanese culture.
We exhibit wonderful bonsai works, which have been carefully grown with affection,
with the cooperation of Matsuda Seisho-en.

How the Japanese white pine (Pinus pentaphylla) becomes a bonsai

More than 400 years, many varieties of Japanese white pine (Pinus pentaphylla) have been breeding improvement, as the result, there are hundreds of characteristic varieties in Japan.

Here, in Takamatsu City, Kagawa Prefecture, we grow the grafted white pine ‘Gin yatsufusa’ meaning of silver leaves with many buds in one place.

Since this breed does not become the same leafiness even if seeds are sown, it surely inherits grafting on two year Japanese black pine seedlings to the next generation. 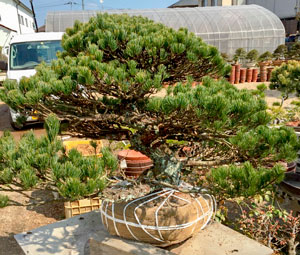 Digging out Japanese white pine and put in the bonsai pot. This has been cultivated for more than 30 years. It will be planted in a bonsai pot from now.

After that, Bending down the branch and wiring, a new life starts as a bonsai.
Even after that, we can keep on living until the life span, which is said to be 500 years, runs out by regular maintenance. 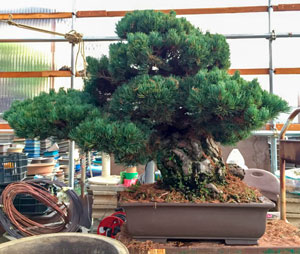 It is a nice thing about this Japanese white pine that the style is not disturbed so much even if it doesn’t take care of it. 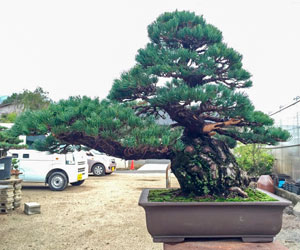 Once in a few years we do pruning, wiring and repotting and keep the beauty as a bonsai.

In order to properly do such work, you would better ask bonsai experts to do so, otherwise you may not keep bonsai healthy and looks stylish. 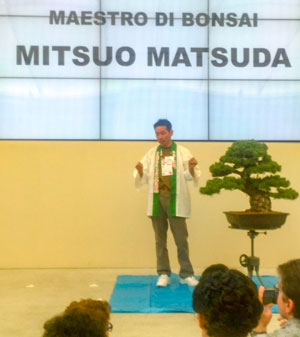 I am the Bonsai expert and have received minister awards at the bonsai exhibition in Japan, and these certain technic is appreciated.

I have been as a demonstrator and a workshop in various countries around the world.

Also, we are very welcome actively participate from overseas and are committed to spreading bonsai.

We are now planning an exhibition where people can appreciate
the charms of Japanese dogs and bonsai,
both of which are the symbols of Japan, somewhere.
We will inform you of the exhibition when the venue is determined.