Messages to
our kennel

As visitors to our kennel have left beautiful messages, some of them are introduced here.

We human beings coexist with a variety of creatures in our daily life. Among them, dogs are especially closest to us. They are familiar with our life style and share feelings with us.

“Shiba” dogs are rather small-sized but brave and have something in common with “samurai warrior”. This time, I was lucky enough to visit your kennel of Shiba dogs, which was a god opportunity to deepen my understanding of Shiba dogs.

ore than 30 wooden cages of about 2 m2, which were very clean and sanitary, were placed in an orderly line, facing south. The great samurai, Shiba dogs, were in the cages under quality management. No unnecessary barking, keen eye-sight, thick and compact ears, dignified mouth, thick and curled tail, attentive posture, shiny hairs—–. I saw such brave dogs in all the cages.

There were cages housing excellent dogs awarded with many prizes and very promising baby dogs to win competitions. In addition, pregnant female dogs were being taken very good care of there, too.

In the kennel, the exercise field and devices, trimming tables, kitchen to prepare meals and other facilities were well established and the dogs’ health was well managed in a sanitary condition. Five or six breeders were in charge of training and supervising the dogs and walking them two or tree times a day. The eyes of the dogs were brave and lively in such a refreshing outside environment and they all looked happy and vivacious. Furthermore, I was surprised to see the rich daily breeding program being implemented under sound management.

The robust sprit of the managers of the kennel to raise excellent dogs was just something. I re-realized their strong passion and believe that great Shiba dogs, who can be representatives of Japan, would be born in this kennel.

I don’t know much about Shiba dogs, but I just described what I found and how I felt in the kennel here. I just want to tell you how much I was astonished to see the wonderful breeding condition in a large-scaled kennel and facilities with a complete management system.

Thank you very much.

From Y.O. living in the deep mountain area in Kamiyama-cho, Myozai-gun, Tokushima 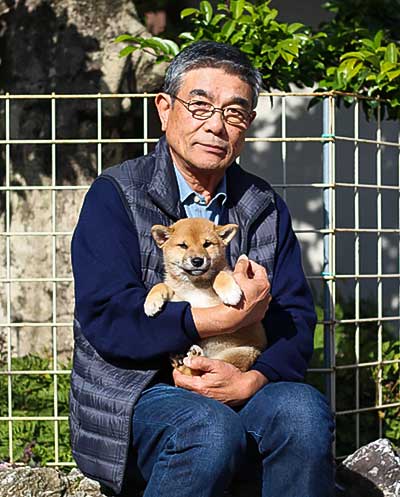 We were very much moved by this kind and sympathetic message which shows the ideal image of Shiba dogs that we are actually pursuing as well as the description of our dogs as “samurai”.
This time, as a token of our gratitude, we presented a puppy who looked like “samurai” to Y.O.

As an interpreter, I have visited more than 30 kennels in Japan over the past years but never seen a kennel like Tokushima Sato-so. In addition, as I am from China, I have also visited many famous kennels in China and now believe that this kennel is the No.1.

When I entered the kennel, I was surprised with the wide space and hygienic environment. I didn’t actually measure the area, but it seemed to be more than several hundreds of m2. There were about 30 beautiful wooden cages of 2m2 in that large area. If you take a close look, you can see the high quality of the cages. The whole kennel was very hygienic and there was no stain or odor in it. Dogs lived there in such a quality environment.

There were many dogs awarded with a lot of prizes, but it was not that but the spirit of the dogs that mattered to me. As I described earlier, I have visited many kennels as an interpreter. The standing postures of the dogs in other kennels were poor and some of the dogs trembled when they met people in many cases. However, Shiba dogs here were totally different. They had a spirit. It was difficult to find correct words to describe their spirit well. But, when I saw their standing postures, the word, “samurai” naturally came out of my mouth.

The facilities of the kennel for the dogs were well established, including an incubator for puppies and exercise devises imported from the US. Five or six staff members responsible for dogs were taking good care of them. The dogs were walked by the staff two to three times a day. The kennel was surrounded by nature. The meals were well-balanced in nutrition, containing a lot of vegetables, meats and nutrients. I was surprised to see the meals because I thought the meals were better than mine. The dogs lived a happy life every day there.

I had a dinner with the chairman and his wife on that day and heard stories about Shiba dogs and their award history, which impressed me a lot. In many kennels, dogs are bred just for receiving prizes. Because more and more people focus only on the award history of dogs these days, a lot of people believe that the award history exactly means the quality of the dog. So, in other kennels, every possible mean is used to make their dogs awarded to sell them at a high price. However, the award history shouldn’t come before the quality, it should be vice versa. He said, “Dogs are here not just to be sold but to offer people a happy experience of raising them”, which impressed me again. After dinning, the chairman and his wife brought steaks to the dogs. Always thinking about the dogs is their custom now. So, there is no wonder that wonderful dogs are raised in their kennel, isn’t there?

Mr. and Ms. Chairman, I thank you very much for giving me an opportunity to visit your kennel! Although the dogs don’t speak human language, I strongly believe that they are thankful to you and all the staff from the bottom of their heart. Instead of the dogs, I would like to say a few words to you here.

“We always thank you very much!”